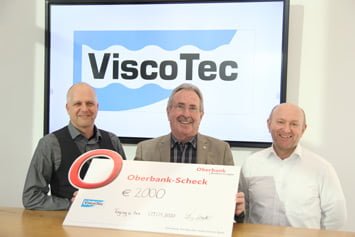 preeflow once again donates regionally, instead of distributing gifts

The District Administrator of the Mühldorf a. Inn district, Georg Huber, received the donation from preeflow by ViscoTec in Töging for the “Mehr Licht für Kinder-Stiftung” (In English: More Light for Children foundation) now. preeflow Manager Thomas Diringer and ViscoTec Managing Director Georg Senftl symbolically handed over a cheque. As in previous years, preeflow, a brand of the dosing technology specialist ViscoTec from Töging, donated to a charitable organization. In 2019, the decision was made in favor of the “Mehr Licht für Kinder-Stiftung“.

With this donation, preeflow supports needy minors and their families in the district of Mühldorf a. Inn. “Material gifts are entertaining but investing in children is investing in the future. That’s why we decided several years ago against gifts for our business partners and in favor of donations,” says Thomas Diringer. District Administrator Georg Huber expressed his sincere gratitude for the donation: “When all legal aid is exhausted or emergency situations require quick support, the foundation helps at short notice and in an uncomplicated way”. The “Mehr Licht für Kinder-Stiftung” promotes and supports minors in difficult social, societal or health circumstances in the district of Mühldorf a. Inn, among other things in medical and therapeutic measures, education and further training as well as the promotion of gifted children, leisure facilities and play opportunities. The Board of Trustees, which is made up of representatives of the church, local politics and the economy, decides where the income from the foundation capital is to be used. A total of 2000 € were collected in the course of the fundraising campaign from preeflow. More information about the “Mehr Licht für Kinder-Stiftung” can be obtained from the District Office in Mühldorf or the Sparkasse Altötting-Mühldorf.

Any cookies that may not be particularly necessary for the website to function and is used specifically to collect user personal data via analytics, ads, other embedded contents are termed as non-necessary cookies. It is mandatory to procure user consent prior to running these cookies on your website.