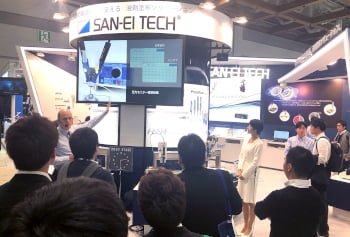 ViscoTec and preeflow presented themselves at the NEPCON Japan trade fair with the parallel exhibition AUTOMOTIVE Technology in mid-January together with their partner SAN-EI TECH at the Big Sight exhibition center in Tokyo. NEPCON is the leading trade fair in Japan in the field of electronics manufacturing, but also relevant for various other industries.

Impressions of the exhibition booth

At the completely new SAN-EI TECH booth, ViscoTec and preeflow products were shown and presented to the general public. Among others, 1-component dispensers such as the preeflow eco-PEN450 and RD dispenser from ViscoTec in various sizes, as well as 2-component systems such as the eco-DUO600 from preeflow, the ViscoDUO-VM and the static-dynamic mixing head vipro-DUOMIX from ViscoTec were exhibited.

Every hour the competent SAN-EI TECH exhibition team held presentations and live demonstrations with the exhibits. A camera recorded the indication of a scale on a large display, which monitored the live dosages with the eco-PEN600, which was mounted on an axis system. The guaranteed precision and repeatability of the dosing technology manufacturer was once again demonstrated here: The deviations of the individual dosages were only minimal – under +/-1 %. A live application was also shown with the slightly larger 3RD12 Dispenser: Silicone was filled into small vessels, also with perfect dispensing results. During these presentations, the ViscoTec and preeflow products and the technology of the endless piston principle were also explained in detail. Live demonstrations and presentations were very well received at the fair. The SAN-EI TECH booth was constantly well attended. Many of the visitors wanted more information afterwards. Many exciting discussions showed the great interest of the visitors.

Overall, NEPCON was very well attended and very promising for the Japanese market. SAN-EI TECH is an established and excellent partner for ViscoTec and preeflow in the field of dosing technology.